They will marry and give in marriage…while chaos descends

It has an interesting take on the synopsis, providing insights to the book as well as, some interpretive imagery direct from the creativity of the Graphic Artist assigned to the book.

It will be interesting to see what feedback we get just from the video. Reference in it to Islam and the Latter Day Saints might generate all kinds of responses.

We thought the voice-over met industry standards, which generally seem fairly bland, while not about to upset viewers by being too bold or aggressive. All the boldness and aggression anybody could want is found in the book. We wipe out ninety percent of the human race.

27 December 2012
FORTH Released In Print

FORTH-Millennium 3 has been released in Print Copy. Already, FORTH-Me3 is listed in Amazon.com/Books and other Online retailer sites. (see Links, on right) 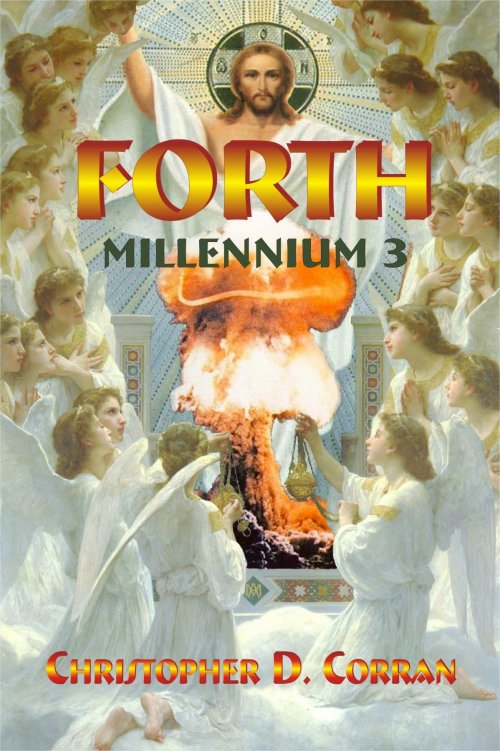 The imagery points to the Second Coming (FORTH) of Jesus Christ, in the midst of global war and the ever-present work of the Angels

This time, the release took us by surprise. There have been many minor details to finalize with regard to all the other elements of ‘Publishing’.

We expect the e-Book edition to be ready soon…but the advent of Christmas meant that necessary work has been interrupted by the customary holidays and celebrations.

We are also awaiting the Video Trailer Press Release, which might come anytime but not while the Publishing Industry is celebrating Christmas – New year.

In addition, we are yet to finalize the Promotional/Marketing Release, which will target both industry and personal email lists, looking for the deepest and widest penetration among both publishing outlets and the wider community.

So we would expect another couple of weeks before all the planned elements of launching the book: FORTH-Millennium 3, will be in place.

This site uses Akismet to reduce spam. Learn how your comment data is processed.